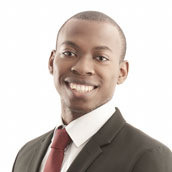 In 2017, Tsepo was admitted as an attorney of the High Court. His practice comprises of all aspects of law, including commercial, criminal, general litigation, commercial litigation, tax-related litigation and drafting of various commercial agreements. He has the right of appearance in the High Court and has appeared in the Magistrate's Court and Municipal Court. He also assists his team in matters conducted at a High Court level. Tsepo is currently completing an LLM in Labour Law with the University of the Western Cape.

Tsepo also has an interest in competition, environmental and social security law. He also has experience in the South African Retirement Fund Industry, dealing specifically with unclaimed benefits. Tsepo is also an avid rugby player.