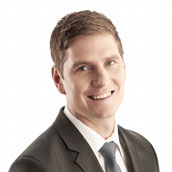 Tiaan obtained his BCom (Law) degree from the University of Pretoria in 2007, followed by his LLB degree in 2009 from the same institution. After he served his articles, he was admitted as an attorney in February 2012 and continued practising in the professional liability and personal indemnity insurance department of a Pretoria-based firm. He has experience acting on behalf of both plaintiffs and defendants in various medical malpractice claims as well as personal injury claims. He has experience representing corporates as well as individuals.

He joined MacRobert Incorporated in January 2015 as a senior associate in the Professional Indemnity Department and specialises in medical negligence law and litigation. He has a keen interest in medical law but also has experience in commercial, insolvency and insurance litigation. In Septembert 2018 Tiaan was appointed as a director of MacRobert.