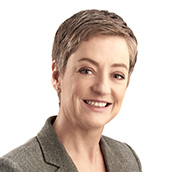 Jeanne obtained the degrees B Iuris and LLB from the University of the Free State. She served articles with Adams and Adams, where her interest in personal injury work was kindled. After her admission as an attorney and notary in 1993, she joined Couzyns for a short while. However, she left them for a position with Cuzen and Woods where she was exposed to medical malpractice litigation.

Jeanne joined the MacRobert medical malpractice department during 1999 where she has been working ever since. She was appointed as a director of the firm in 2007. She is also admitted as a conveyancer.